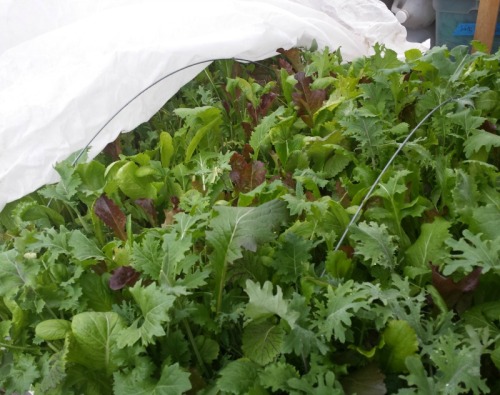 As we approach the shortest day of the year most people’s attentions have turned from gardening to other indoor activities.  The plants too have turned inward during this time of cold and limited light.  If you had the foresight to plant winter greens in a cold frame or greenhouse you’ve probably noticed that not too much is going on right now.  The reason for this is because we are in the Persephone Period.

Humans have long had their own way of understanding the changes in day length and its affect on agriculture. Early Greek farmers, whose practical experience added mythical stories to astronomical fact, knew intimately that the power of the sun and the length of the day are the principal influences on agriculture. They created the myth of Persephone to explain the effect of winter conditions. As the story goes, the earth goddess Demeter had a daughter, Persephone, who was abducted by Hades to live with him as his wife in the netherworld. Demeter would have nothing to do with this and threatened to shut down all plant growth. Zeus intervened and brokered a deal whereby Persephone would spend only the winter months with her husband, Hades. Demeter, saddened by her daughter’s absence, made the earth barren during that time. On our farm we refer to the period when the days are less than ten hours long as the Persephone months.

Depending on your latitude the Persephone Period can be longer or shorter compared to other places.  Here in Santa Fe it lasts from Thanksgiving to January 14th whereas in Maine it lasts from November 5 to February 5 .  While the plants may not be doing much right now there are still plenty of activities for the gardener to attend to.

Clean out and fertilize the garden– If you are like me you may or may not have gotten around to pulling the dead plants and spreading manure after the harvesting is over.  It’s never too late to take advantage of a warm day to reset things and allow nature ample chance to replenish the ground.

Water the Perennials-  While we have been blessed with a series of light snow storms this year it is important to get out 1-2 times a month and check the soil around your perennials to make sure it is still moist.  Bulbs, trees and bushes use these months to grow roots and can be set back if they are allowed to dry out.  In addition moist soil will protect your plants from deep freezes.  Wet soil will freeze into a protective block around roots and keep them safe when the thermometer plunges into single digits and lower.

Get set for next year-  Now is the time to peruse those seed catalogs that have been showing up in the mailbox.  Look at last season’s notebook and think about what new varieties you would like to try next year.  Go over your tools and equipment and repair or replace the broken stuff. Collect supplies for starting seeds.  In just a few months it will be time to start the new planting year and there is nothing that helps with the winter blahs as much as having a flat of fresh starts in the window or under lights.

While we are in a time of well earned rest and recuperation right now, before we know it the plants under glass will be kicking back into high gear for early spring salads.  Then the snow will be melting and the first sprouts of spring will be tentatively poking up outside ready to start all over again.

This entry was posted in Uncategorized. Bookmark the permalink.

One response to “The Persephone Period”