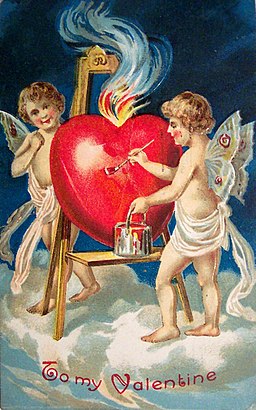 Happy Valentine’s Day to all you lovers of people, pets, plants, pizza, and world peace!!

Ever wonder about the origins of Valentine’s Day, once you’ve had a chance to buy your beloveds, friends, family and work mates those beautiful bouquets of flowers, pots of plants, plant and gardening books, and one single perfect flower bud??

Well, me neither, but in the interest of knowledge for you dear readers, I looked up the real history of Saint Valentine, and the origin of the celebration…

The “origin” stories are all shrouded in mystery.  There were three different Christian saints named Valentine or Valentinus, all martyred by the Emperor Claudius… Thanks to the actions of a prisoner named “Valentine,” possibly a Roman soldier, who sent a “love” letter to a young girl who he was in love with (possibly the daughter of his jailer), we now have the custom of sending love letters to those whom we love…Valentine signed his love note “From your Valentine,” and a great tradition was born…

By the Middle Ages, St Valentine had become the most popular saint in both France and England.

St Valentine’s feast was placed in the middle of February, in order to “Christianize” the pagan celebration of LUPERCALIA, a fun fertility festival dedicated to Fannus, the Roman god of agriculture, as well as to the founders of Rome, Romulus and Remus…

During the Middle Ages, people believed that February 14 was the beginning of the mating season for birds, and thus, Valentine’s Day became a day for romance—for everyone!

“…when every foul cometh ther to choose his mate.”

Written valentine cards and greetings appeared after 1400, the first written by Charles, Duke of Orleans, to his wife, while he was imprisoned in the Tower of London, after his capture at the Battle of Agincourt.

Cupid, chubby little naked cherub, shooting arrows of love at unsuspecting lovers, first appeared in the Hellenistic period.  By mid-18th century, English and French friends and lovers, all exchanged small tokens of affection or handwritten notes to each other, and by 1900, with improvements in printing and technology, printed cards replaced written letters.

In the 1840’s, the American, Esther Howland, began selling the first mass-produced valentines in the United States. She is known as the “Mother of the Valentine;” she used real lace, ribbons, and pictures to create her valentines.

So, all you amorous souls, send your friends, sweeties, spouses your own special valentine greetings: cards, plants, flowers, gardening supplies, today and throughout this week.